The Power of Lists

I am a strong believer in writing and journaling to create a mindset for success.  Getting your thoughts out of your head and on to paper can be transformational.

One of the easiest ways to do this is to write lists, and I am not talking about “To Do” lists here, although I do think they are fantastic.

Something I have started to do is to write lists of good things that have happened in my life throughout the year.

You can start now by putting the heading 2016 and writing things onto your list as they happen.  I now have lists for 2014, 2015 and a part written list for 2016.  When you look back at your lists from previous years it is fantastic because you see so much that happened that you had perhaps forgotten about.  The things on your list can be small things or big things, it doesn’t matter.  I have things on my list such as a new book I came across and read, or a new personal growth mentor that I found on YouTube.

Reading through your lists can trigger you to take action on something or go back and read a book again that you really enjoyed.

Here are some other types of lists that you can write;

As well as writing my lists on paper, I also keep them on my phone in the notes section so that I can refer to them when I have a few minutes.

Reading through good things that have happened builds our belief in ourselves.

Its a bit like keeping a diary.  These days we make diary entries on our phones and devices, but it was not so long ago when a good old fashioned diary was the only way.  I have often looked through my past diaries and thought to myself “Wow –  I did accomplish a lot in that year!”

So writing lists can have an empowering effect on you and show you just what you are really capable of achieving.

Because your lists consist of only good, happy things, its also a way to get you back up to speed quick when you are having a moment of negativity.  You can train yourself to change your negative thought to positive by quickly referring to your lists whenever you need to.

I hope you have fun creating your lists.  Comment below about the lists you love to write.

P.S I have a brand new ebook that you can download for free, just go to www.shypeoplecanbesuccessfultoo.com 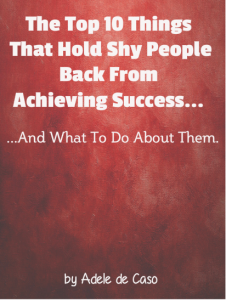